When Virgil thinks about President Donald Trump vs. Rep. Thomas Massie, he thinks back to a famous moment in Roman history—63 BC, to be precise—when the great statesman, Cicero, stood up on the floor of the Roman Senate to denounce a fellow senator, Catiline, for plotting to undermine the Republic. A famous painting from the 19th century tells the tale—and it was a tale that ended badly for Catiline. 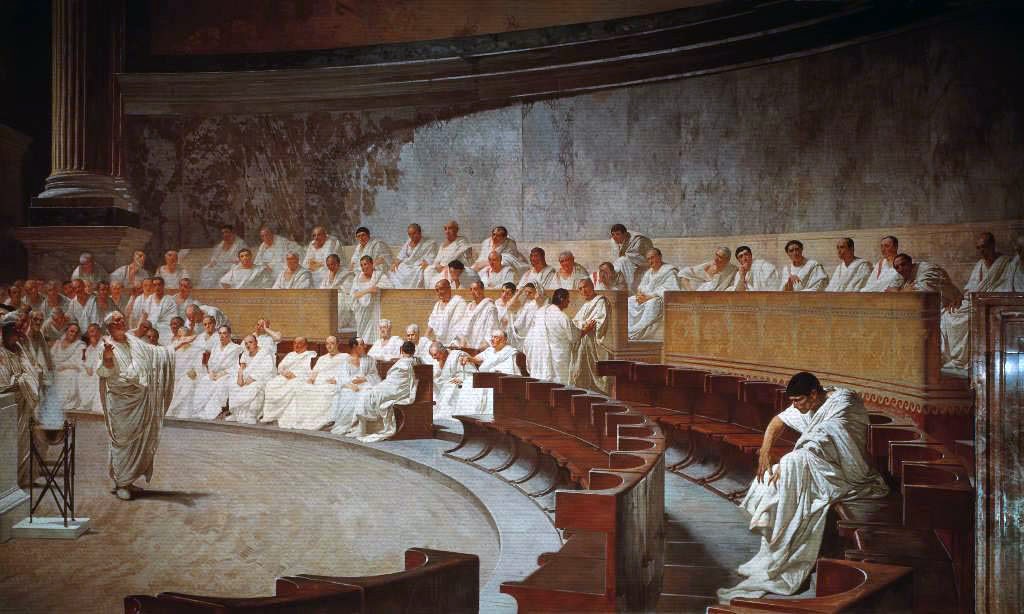 Now, more than 2,000 years later, Trump—having epically denounced everyone from Hillary Clinton to Nancy Pelosi to Adam Schiff to Mitt Romney—is at it again, and with good reason. On March 27, the object of presidential ire was Massie, who took it upon himself to delay passage of the CARES Act, the lifeline the economy needs in the midst of the coronavirus crisis.

That legislation was so important that every member of Congress, in both parties, in both chambers, was on board with allowing it to pass on an emergency basis—even if he or she might have personally opposed it.

That was the case, for example, for Rep. Alexandria Ocasio-Cortez. She was as strongly against the bill as anyone, calling it “shameful,” and yet even she didn’t seek to block it. That was also the case with another Democrat, Rep. Haley Stevens of Michigan, who went “crazy” on the House floor, in the words of Breitbart News’s Hannah Bleau. Yet still, Stevens, “panicked” as she was—she had to be angrily gaveled down by her fellow Democrats—agreed to the passage of the bill.

In other words, Massie was alone—the only lawmaker who wished to obstruct the CARES Act. He might think that his action makes him a hero, but most others think it makes him, well, to put it mildly, a bad lawmaker.

It’s all well and good for someone to say that his or her conscience dictates a certain course of action, no matter how lonely or solitary it might be. And yet it’s questionable whether a conscience-stricken solo artist should be in a legislature at all. Lawmaking is, of course, by definition, a group activity.

And as for any deliberative body, the goal of a legislature is to get things done—or, as they say, to make the sausage—and so maybe a self-absorbed prima donna ought to find another line of work. Perhaps somewhere there’s a job for Massie in which he can just stare into a mirror and trill to his own moral superiority.

Under the headline, “Thomas Massie’s forced coronavirus vote is irresponsible,” the Washington Examiner’s Kaylee McGhee made the real-world conservative case against Massie’s dereliction of duty. McGhee agreed with much of Massie’s critique of specific porky provisions in the bill, and yet as she put it, “The coronavirus relief bill is not perfect. It might not even be good. But it is better than nothing. And given a choice, most people would prefer inadequate help to no help at all.”

Once again, that’s the nature of politics. And it’s true that politics, being made by human beings, will never be pure enough for a purist.

So if one’s precious conscience doesn’t agree with the political truism, “Half a loaf is better than none,” that’s fine—but maybe the “precious” ought to find something else to do.

The real problem with Massie, McGhee continued, was the sheer perverseness of his position. That is, Massie wasn’t seeking to persuade anyone—he was simply making a shrieking statement of his own contempt for Congress, and for the national interest. Once again, other Americans might think that way, too, but as a Member of Congress (at least for now), Massie certainly can’t expect to get anything done for the people he was elected to serve. As McGhee concluded,

This roll-call vote is irresponsible for several reasons, the most obvious being that it forces representatives to abandon isolation and group together in direct violation of health officials’ social distancing guidelines. Some representatives have tested positive for COVID-19, and others have remained self-quarantined out of respect for their other colleagues.  Massie is now callously undermining the caution this pandemic demands.

Yes, that Massie is a piece of work. But why not take it from The Man himself? On the 27th, Trump denounced Massie in an epic tweet-storm:

Looks like a third rate Grandstander named @RepThomasMassie, a Congressman from, unfortunately, a truly GREAT State, Kentucky, wants to vote against the new Save Our Workers Bill in Congress.  He just wants the publicity.  He can’t stop it, only delay, which is both dangerous . . . & costly. Workers & small businesses need money now in order to survive. Virus wasn’t their fault. It is “HELL” dealing with the Dems, had to give up some stupid things in order to get the “big picture” done. 90% GREAT! WIN BACK HOUSE, but throw Massie out of Republican Party!

Of course, thanks to Trump’s prodding, the compromise bill passed, with Massie sitting in his own pouty Catiline corner.

Later that day, as he signed the legislation in the Oval Office, Trump laid out the stakes in another tweet: “We are marshaling the full power of government and society to achieve victory over the virus. Together, we will endure, we will prevail, and we will WIN! #CARESAct.”

Trump has the right tone here: This is a war, and we must win it. In the meantime, people on the front lines of the fight—in the emergency rooms—are working hard and paying a heavy price; it’s estimated that fully a fifth of those suffering from COVID-19 are EMTs, nurses, and doctors. Together, these brave health workers form a national honor battalion—and by not honoring them, Massie has dishonored himself.

So yes, in a vital war, good citizens—including politicians—must get with the war effort. To do otherwise is to be a bad citizen, a shirker, or worse. And as for useless politicians, well . . .  they might lose their seat.

Speaking of losing a seat in a vainglorious pose, Massie might wish to acquaint himself with the story of Rep. Jeannette Rankin of Montana, who holds the dubious distinction of being the only member of Congress to vote “nay” on the 1941 declaration of war against Japan, in the wake of Pearl Harbor. Yes, the vote was unanimous—save for Rankin playing the lone naysayer. Indeed, we could even say that Jeannette Rankin was the Tom Massie of her time. (Rankin lost her seat, of course, in the next election.)

Interestingly, late on the 27th, the Republican Jewish Coalition—which rarely involves itself in GOP primaries—announced that it was supporting Massie’s primary opponent this year. That opponent would be Todd McMurtry, a conservative lawyer who represented Nick Sandmann, the Covington Catholic High School teenager who in 2019 was falsely accused of . . .  something (or was it everything?) by the Main Stream Media.

In other words, McMurtry worked effectively to turn the tables on the MSM; from now on, arrogant reporters will have to be more careful about smearing ordinary kids from the Heartland.

So we can see, McMurtry has done something genuinely constructive. And he pledges to work with Donald Trump, as well as with his fellow Kentuckian Mitch McConnell, along with other problem-solvers. Surely, that’s the sort of servant-leadership the people of Kentucky’s Fourth Congressional District want—and deserve.

Oh, and one last thing: Catiline, the ancient conspirator against the Roman Republic, died a violent death shortly after Cicero denounced him. He wasn’t missed.

Of course, in our time, Virgil would never wish physical harm on anyone. Yet he, and many others, would be happy to see Massie safely retired from politics. And more importantly, so would the Commander-in-Chief.

The 40+ best Cyber Monday deals under $50, from Echo Dots to Everlane slippers

The 4 best resistance bands for building strength and muscle rehabilitation

The 4 best resistance bands for building strength and muscle rehabilitation