The U.S. Senate confirmed a judge appointed by President Donald Trump, and opposed by Senate Democrats, to serve on the U.S. Court of Appeals Thursday by a close 51-42 vote.

Trump nominated Judge Justin Walker to serve on the U.S. Court of Appeals for the D.C. Circuit in May, and the announcement was met with opposition from Democratic politicians who criticized the newly appointed district judge for his past comments on a Supreme Court ruling upholding ObamaCare, according to Bloomberg Law.

Walker’s nomination was met with opposition from Democratic politicians, who criticized the newly appointed district judge for his past comments on a Supreme Court ruling upholding ObamaCare, according to Bloomberg Law. Pro-life and religious freedom organizations celebrated his confirmation, hailing him as a proponent of religious freedom, referencing one of his recent rulings as a judge in the Western District of Kentucky.

“On Holy Thursday, an American mayor criminalized the communal celebration of Easter,” Walker wrote in his 20-page opinion. “That sentence is one that this Court never expected to see outside the pages of a dystopian novel, or perhaps the pages of The Onion.” 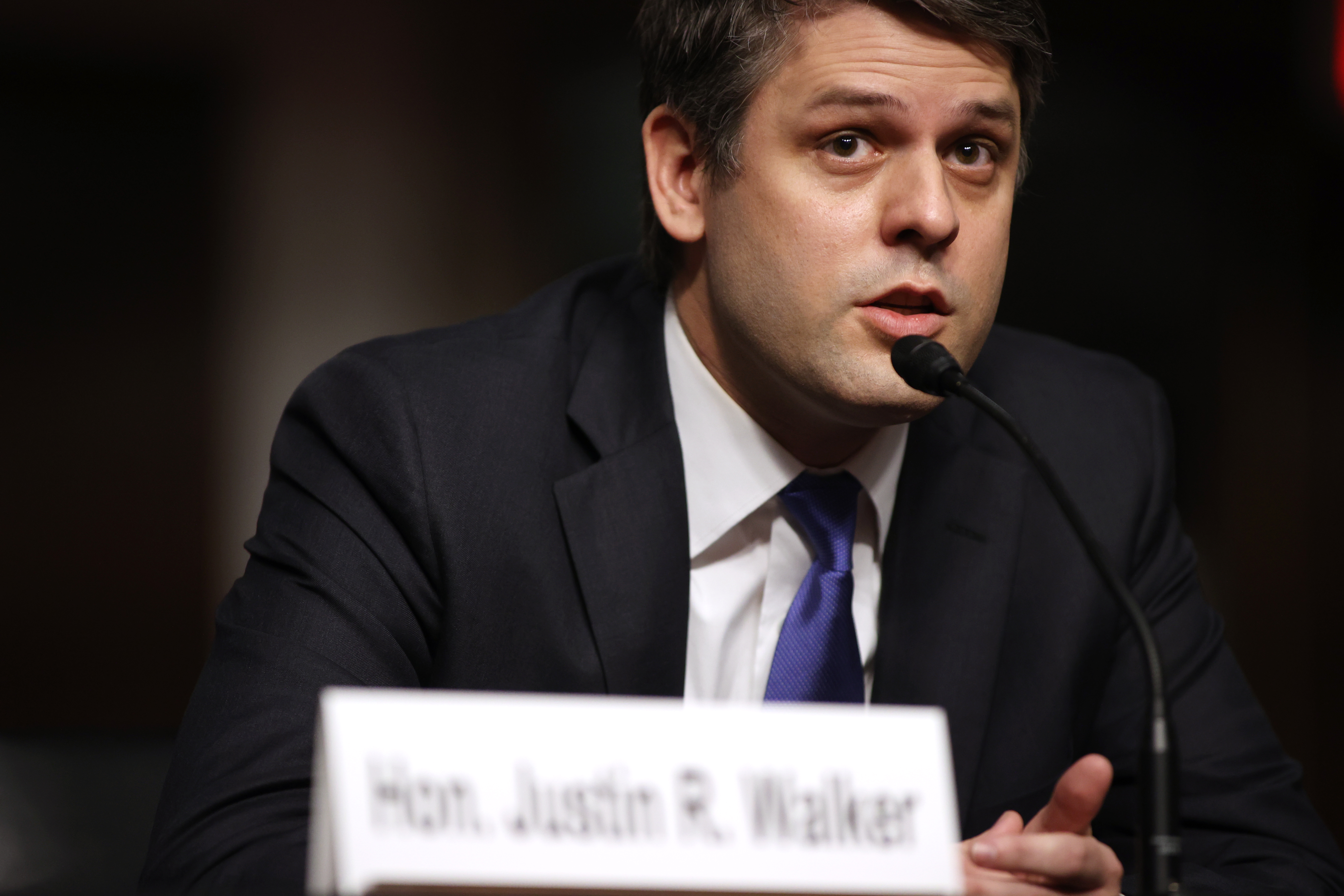 Judge Justin Walker testifies before his U.S. Senate Judiciary Committee confirmation hearing on his nomination to be a U.S. Circuit Court judge for the District of Columbia Circuit on Capitol Hill on May 6, 2020 in Washington, DC. (Jonathan Ernst – Pool/Getty Images)

Republican Maine Sen. Susan Collins was the only Republican vote against Walker’s confirmation, and criticized what she called “ideological” comments from him. Her remarks may refer to comments he made at his judicial investiture ceremony when he was confirmed as a district court judge last year, according to Fox News.

“Thank you for serving as an enduring reminder that although my legal principles are prevalent, they have not yet prevailed, and although we are winning we have not won,” Walker said during the ceremony, Fox reported. “And that although we celebrate today, we cannot take for granted tomorrow, or we will lose our courts and our country to critics who call us terrifying and who describe us as deplorable.”

Walker also addressed Kavanaugh at the ceremony, referring to hearings the Supreme Court justice’s nomination process: “You were like St. Paul, hard pressed on every side but not crushed, perplexed but not in despair, persecuted but not abandoned, struck down but not destroyed.”

“While Judge Walker is entitled to hold whatever personal views he chooses, his ideological comments on the very day he was formally installed as a federal judge — about winning and losing the courts and a war against those who hold views that are different from his own — prevent me from supporting his elevation to the second highest court in the land,” Collins said in a statement, Fox reported.

The Susan B. Anthony List, a pro-life organization, applauded Walker’s confirmation, telling the Daily Caller News Foundation in a statement that he is a “principled judge of the highest caliber with distinguished honors and experience.”

“He will continue to respect the Constitution and the rights of all people,” said SBA List President Marjorie Dannenfelser. “Justin Walker is an outspoken defender of religious liberty, and we are confident he will provide a strong level of accountability to the D.C. Circuit – his impressive credentials speak for themselves. Walker will uphold the constitutionalist principles upon which our nation was founded.”

McConnell, who personally lobbied Trump to pick Walker, according to the New York Times, also praised his former intern.

“Judge Justin Walker, the President’s choice to serve on the U.S. Court of Appeals for the D.C. Circuit, is an outstanding legal scholar and a leading light in a new generation of federal judges,” McConnell said in a statement after Walker was nominated to the D.C. Circuit, according to Fox.

He became a member of the conservative Federalist Society in 2006 and remained a member until last year. He has also worked for the literary agency Javelin, according to the New York Times.