States that have held primary elections amid the coronavirus pandemic have faced challenges ranging from influxes of mail-in ballots and hours-long lines to understaffed polling places and broken voting machines.

Recent elections, which have been for presidential and down-ballot primaries, were held June 2 and June 9 across 15 states and Washington, D.C. More states, including New York and Virginia, are slated to vote June 23.

Amid heightened fears over coronavirus, many voters have opted to vote by mail, and many polling locations have had difficulty recruiting workers, raising concerns about preparing for a nationwide, largely by-mail election in November, according to elections experts across the country.

Walter Olson, a constitutional expert and legal scholar at the Cato Institute, explained how despite the obstacles, mail-in voting is the best solution to a bad situation — the COVID-19 outbreak.

“Every vote cast by mail is a vote that can sidestep these dangers and avoid contributing to election-day crowds,” Olson told the Daily Caller News Foundation, referring to the efforts taken to mitigate the spread of coronavirus.

He continued: “Critics make some good points about the increase in expense and the difficulties of trying to make a rapid transition to an entirely new system. They’re also right to warn about the importance of keeping tight controls against dangerous practices like ‘vote harvesting,’ sloppily kept and outdated voter rolls, and the sending of ballots to post office boxes.”

“By all means, let ballot security be part of the push,” Olson said. “But a push there should be for wider options this year.”

In Georgia, a state that held its primaries June 9, problems with polling places were even more apparent as officials raised concerns over broken machines.

If you are in line, PLEASE do not allow your vote to be suppressed. PLEASE stay in line. They should offer you a provisional ballot if the machines are not working. https://t.co/1lVu3rEsCg

“It was after 7:30 a.m. when we went inside the voting area only to be told the machines were down,” Georgia voter Monica Hickman told CNN.

She continued: “When it’s time to vote, everything should work properly because we’re living in critical times and this is one of the ways our voices can be heard.”

Georgians had already cast close to 1 million absentee ballots about a week out from the state’s primary, according to numbers on the Georgia Secretary of State office’s website.

In 2016, more than 4.1 million Georgians cast a ballot in the general election, and that number is expected to be surpassed in November, reported The New York Times.

What unfolded in Georgia on Tuesday led Brad Raffensperger, Georgia’s Republican secretary of state, to launch an investigation after some, including Jon Ossoff, who turned out to be Georgia’s Democratic Senate nominee, likened what had unfolded to voter suppression.

The DCNF reached out to the Fulton County supervisor for comment, but received no response.

They want to discourage you.

They want you to give up and go home.

It’s not right. It’s not just.

VOTE so we can pass a New Civil Rights Act and a New Voting Rights Act to secure the franchise and equal justice for all!

In Washington, D.C., which held its election on June 2, there were reports of long wait times — some multiple hours long, according to DCist, citing polling locations around the district.

Even though only about 33,000 D.C. voters showed up to vote in person, according to the D.C. Board of Elections, the shortage of poll workers to sanitize voting machines and process ballots nearly ground the system to a halt.

“I know that D.C. voters spent hours at the polls yesterday and that is nothing short of failed execution,” said Democratic D.C. Mayor Muriel Bowser on June 3, referencing voters’ experiences with broken machines on top of their concerns over contracting coronavirus.

A worker cleans a ballot scanner after it was used at McKinley Technology High School on primary election day on June 2, 2020 in Washington, DC.

The mayor addressed the district’s failure to adequately prepare for the primary, but assured residents that the November general election would run more smoothly.

In Pennsylvania, results for some races were delayed and were not complete until days later, according to WSKG.

In addition to the pandemic, some Pennsylvania voters residing in denser areas had also opted to vote by mail because some polling places were closed due to the protests taking place. Demonstrations sparked nationwide after the death of George Floyd, who died after a Minneapolis police officer knelt on his neck for several minutes, video showed. (RELATED: Iowa GOP Rep. Steve King Loses To Primary Challenger Randy Feenstra)

Rick Krajewski, a progressive candidate for a Pennsylvania state House seat and an advocate for mail-in voting, said officials have to “step up how we’re handling this.” 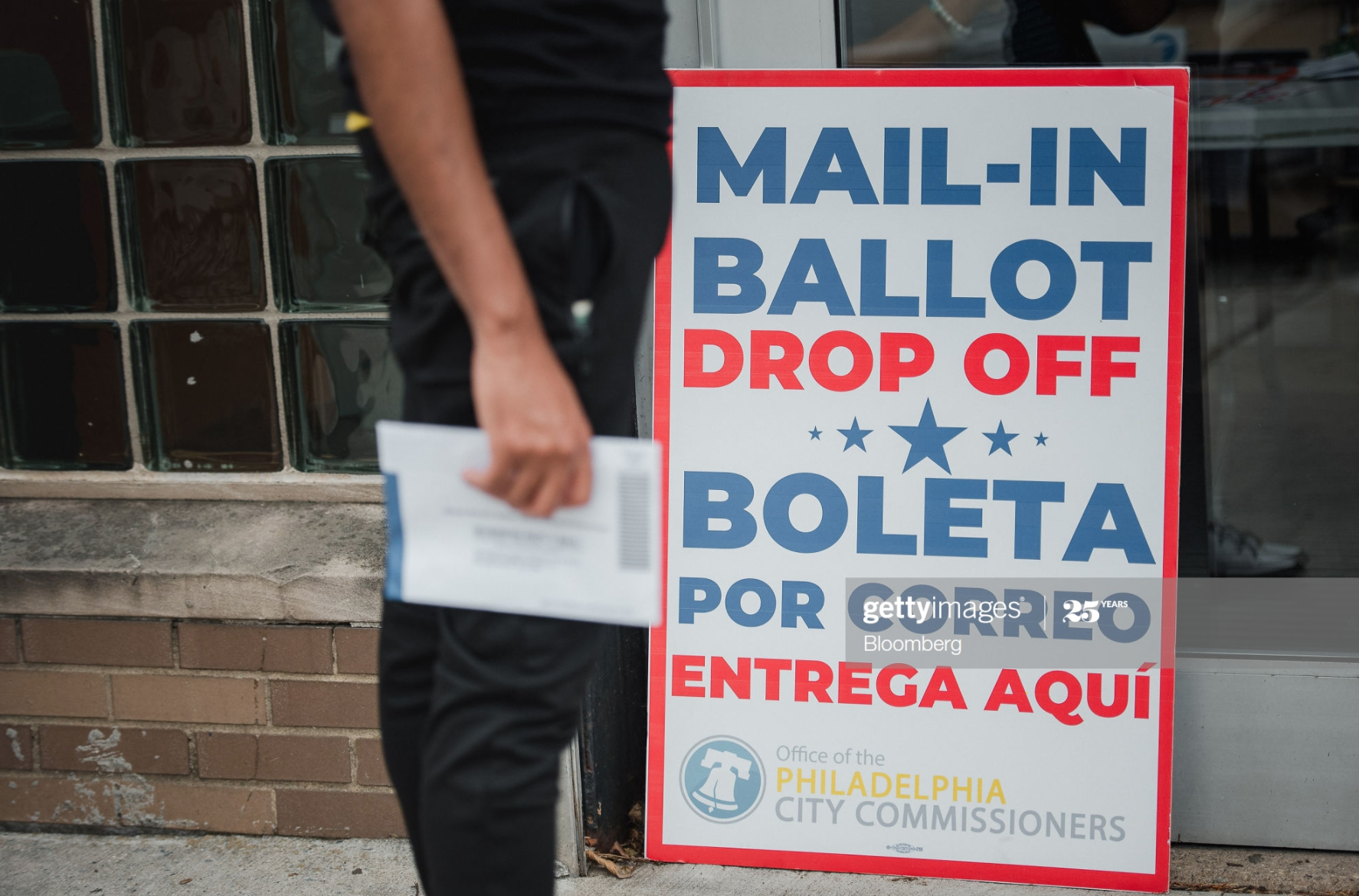 A voter waits to drop off his mail-in ballot at West Oak Lane Library in Philadelphia, Pennsylvania, U.S., on Tuesday, June 2, 2020. (Bloomberg via Getty Images)

In Iowa and Montana, where elections were held on June 2, polling places operated relatively smoothly, and mail-in voting led to much higher turnouts in both states. In Iowa, about 223,000 Democrats returned absentee ballots on Tuesday, according to Secretary of State Paul Pate.

That was far higher than the nearly 176,000 people who voted in the state’s 2018 gubernatorial primary both in-person and by mail, TheNYT reported.

In Montana, where Democrats nominated Gov. Steve Bullock for a Senate seat, 45% of registered voters returned ballots by mail.

The Montana secretary of state’s office did not respond to a request for comment from the DCNF.

While Iowa and Montana held more successful primaries than the other states, they were helped by their extended preparation for the influx of ballots they were going to receive, in addition to their relatively small populations.

For election officials, the overarching constant observation so far is the surge in high turnout that has been achieved through increases in absentee voting.

After Georgia’s voting crisis, Atlanta Mayor Keisha Lance Bottoms gave her own evaluation: “Let’s all work, hope and pray that this not be a preview of November.”