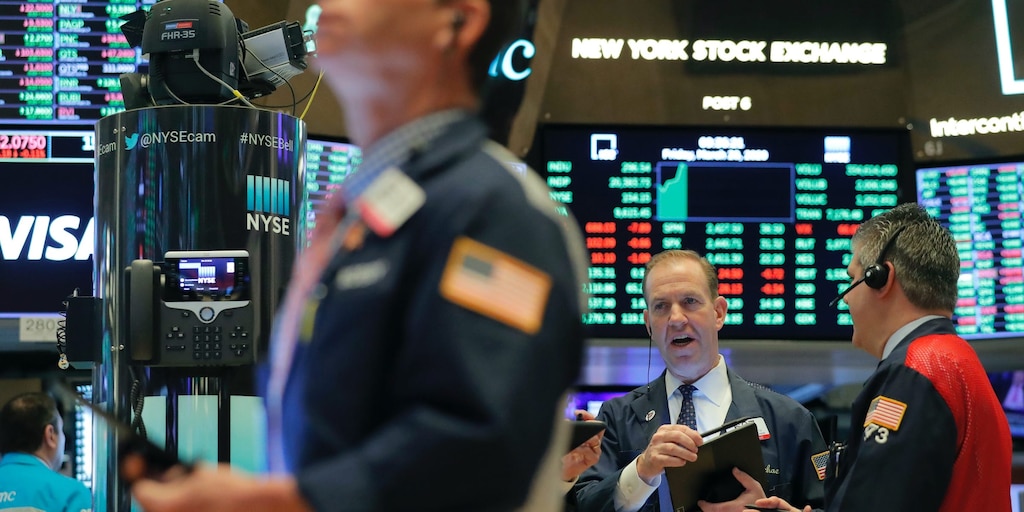 The S&P 500 landed within 2% of a record high. The Dow Jones industrial average posted its fourth-straight gain, lifted mostly by rallying Disney shares.

Republicans and Democrats face increasing pressure to ink a deal on a second round of fiscal relief. Treasury Secretary Steven Mnuchin said Tuesday that the White House and Democratic legislators hope to finalize a deal by the end of the week.

Here’s where US indexes stood at the 4 p.m. ET close on Wednesday:

Read more: 100 deals and $1 million in profit a year: Here’s how Mike Simmons made a simple change to his real-estate investing strategy that took him from small-time house flipper to full-fledged mogul

Still, disagreements on unemployment insurance expansion and aid for state and local governments stand in the way of a breakthrough. White House Chief of Staff Mark Meadows and Mnuchin reportedly told Republican legislators that, if a deal isn’t made by Friday, there won’t be a stimulus bill agreement.

Hiring data released by ADP on Wednesday showed private payrolls in the US increasing by 167,000 in July. The reading lands well below the 1.2 million estimate from economists surveyed by Bloomberg and the revised 4.3 million increase seen in June.

Investors also weighed reports of US-China trade negotiations set to start later this month. The Wall Street Journal reported late Tuesday that senior US and Chinese officials will discuss the countries’ “phase one” trade deal on August 15, six months after the agreement was made. News of the talks comes after recently inflamed tensions between the economic superpowers spooked markets.

Read more: 3 ultra-growth fund managers who are crushing the market during a chaotic year told us how they’re doing it — including their biggest themes and top picks for the future

A better-than-expected quarterly performance by Disney boosted major indexes. The company posted a surprise profit of 8 cents per share and announced it surpassed 100 million subscribers across its Disney Plus, ESPN , and Hulu streaming services.

Novavax shares surged after the biotech firm revealed its COVID-19 vaccine “was generally well-tolerated and elicited robust antibody responses” in an early-stage study.

Shares of online retail firm BigCommerce more than tripled in its trading debut before shares were halted due to volatility. The company sold 9 million shares and raised roughly $216 million.

Read more: MORGAN STANLEY: The government’s recession response has the stock market heading for a massive upheaval. Here’s your best strategy to capitalize on the shift.

High-flying Nikola Motors sank after the company missed expectations in its first-ever earnings report. The automaker’s quarterly loss swelled to $86.6 million from $16.8 million in the year-ago period. Losses per share reached 16 cents compared to the analyst estimate of 13 cents. Analysts on Nikola’s earnings call pressed the firm for not revealing more details on future sales or product rollouts.

Airline stocks rallied after Senate Republicans pitched an additional $25 billion in government loans for the ailing sector. Though billions were offered to the firms in March’s CARES Act, several airlines instead raised cash in the revived debt market.

Read more: Wells Fargo lays out a plausible scenario where the Fed becomes insolvent — and breaks down the catastrophic effect that would have on the bank’s ability to handle future crises

Gold spot prices rose to a new record high after passing the $2,000 per ounce level on Tuesday. The precious metal has rallied in recent weeks amid fears of a weakening dollar and broad shift to safe-haven assets.

Oil jumped to its highest level in five months after a deadly explosion in Lebanon prompted new fears of market volatility in the region. West Texas Intermediate crude gained as much as 4.4%, to $43.52 per barrel. Brent crude, oil’s international standard, climbed 4.1%, to $46.23 per barrel, at intraday highs.

Fund manager Tom O’Halloran quadrupled investors’ money in 9 years by betting on super high-growth companies. He explains his approach, and why new technologies could make the next decade even more prosperous than the 2010s.

Stocks may be ‘too big to fail’ as Main Street fixates on market moves, strategist says