A vaccine against the novel coronavirus may be ready as soon as September, according to a British vaccinologist from Oxford University who is leading one of the most advanced efforts for immunization.

Dr. Sarah Gilbert, a professor of vaccinology at Oxford University, told The Times on Saturday that she was “80 percent confident” that a vaccine being developed by her team of researchers would work and would become available to the general public in about five months.

Human trials are due to begin in the next two weeks, she indicated.

“I think there’s a high chance that it will work based on other things that we have done with this type of vaccine,” Dr. Gilbert told The Times.”It’s not just a hunch and as every week goes by we have more data to look at. I would go for 80 percent, that’s my personal view.”

The vaccinologist said she and her team are in talks with the British government to begin production as soon as possible. “We don’t want to get to later this year and discover we have a highly effective vaccine and we haven’t got any vaccine to use,” she was quoted as saying.

Over 60 potential vaccine candidates and treatments for coronavirus are being developed in labs around the world, most in pre-clinical stages. At least one vaccine, by US company Moderna, is already being tested in clinical trials which began last month.

In Israel, scientists at the state-funded Migal Galilee Research Institute have said that their vaccine for coronavirus was on track to be ready for testing within “a few weeks” though it won’t be available for months because of the lengthy and sometimes bureaucratic testing and approval process. 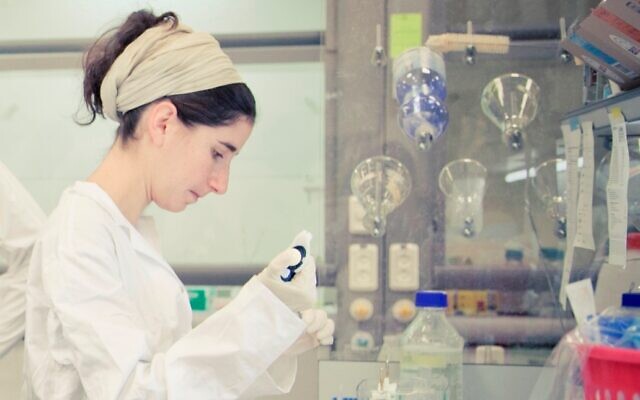 A lab worker at Migal in an undated photo released by the research institute. (Courtesy: Lior Journo)

Pharmaceutical and industry experts have warned that a vaccine may take 12-18 months to develop, following clinical trials and safety approvals.

In the US, meanwhile, researchers have opened another safety test of an experimental COVID-19 vaccine, this one using a skin-deep shot instead of the usual deeper jab.

“It’s the most important trial that we’ve ever done,” Dr. John Ervin of the Center for Pharmaceutical Research told The Associated Press afterward. “People are beating down the door to get into this trial.”

The experiment, using a vaccine candidate developed by Inovio Pharmaceuticals, is part of a global hunt for much-needed protection against a virus that has triggered an economic shutdown and forced people indoors as countries try to stem the spread.

Inovio’s study is set to test two doses of its vaccine, code-named INO-4800, in 40 healthy volunteers at the Kansas City research lab and the University of Pennsylvania. Inovio is working with Chinese researchers to also begin a similar study in that country soon. 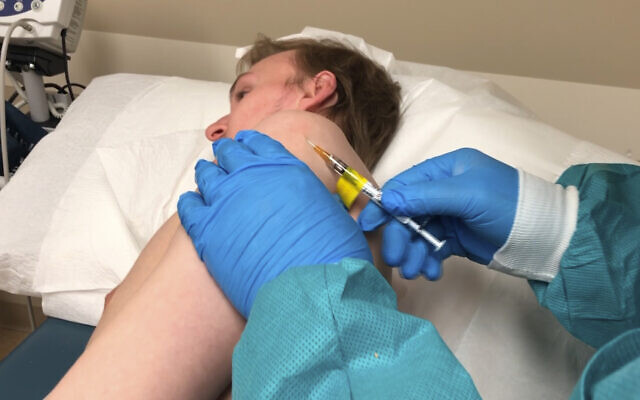 These early-stage studies are a first step to see if a vaccine appears safe enough for larger tests needed to prove whether it will protect.

“The good thing is we’ve got a bunch of candidates,” Dr. Anthony Fauci, the US National Institutes of Health’s infectious diseases chief, said during a podcast for the Journal of the American Medical Association Wednesday.

Most of the vaccines under development have the same target: A spike protein that studs the surface of the virus and helps it invade human cells. Yet many work in quite different ways, making it crucial to test different options.

Inovio researchers packaged a section of the virus’ genetic code inside a piece of synthetic DNA. Injected as a vaccine, the cells act as a mini-factory to produce harmless protein copies. The immune system makes protective antibodies against them — primed if the real virus ever comes along.

Inovio research and development chief Kate Broderick likens it to giving the body an FBI wanted poster so it can recognize the enemy.

But after the skin-deep injection, researchers must hold a device over the spot that gives a little electrical zap. The synthetic DNA is large when it comes to penetrating human cells, and the pulse helps the vaccine more easily penetrate and get to work, Broderick said.

DNA vaccines are a new technology. But Inovio has experimental vaccines against other diseases that are made the same way that have passed initial safety testing.

The NIH’s vaccine candidate, manufactured by Moderna, works similarly, except it uses a type of genetic code called messenger RNA and is injected deeper — into the muscle.

Neither NIH’s nor Inovio’s potential vaccines are made using the actual virus, meaning there’s no chance of getting infected from the vaccines — and it’s possible to make far more quickly than traditional shots.

Separately, an experimental anti-viral drug for patients with severe infections has shown some promise in an early analysis. A new report published in the New England Journal of Medicine tracked 53 people in the US, Europe and Canada who received the Ebola drug remdesevir by US company Gilead Sciences over the course of 10 days. Clinical improvement was observed in 36 of the patients after several weeks.

The coronavirus has affected over 1.7 million people worldwide, with over 100,000 deaths and close to 400,00 recoveries.

A fuel shortage is driving Laos

A fuel shortage is driving Laos