The latest data show that death rates from coronavirus or COVID-19 are stable or falling in many states, including those that have shown a recent spike in the number of coronavirus cases.

On Friday, Texas and Florida paused their re-openings, as both states showed a surge in new COVID-19 cases.

At the same time, data from the New York Times COVID-19 dataset, obtained on GitHub, shows that death rates in Texas and Florida are falling, at least for now.

There may also be many undetected cases, and deaths tend to lag cases, meaning a current spike in cases might not yet be reflected in the death rate as of today. 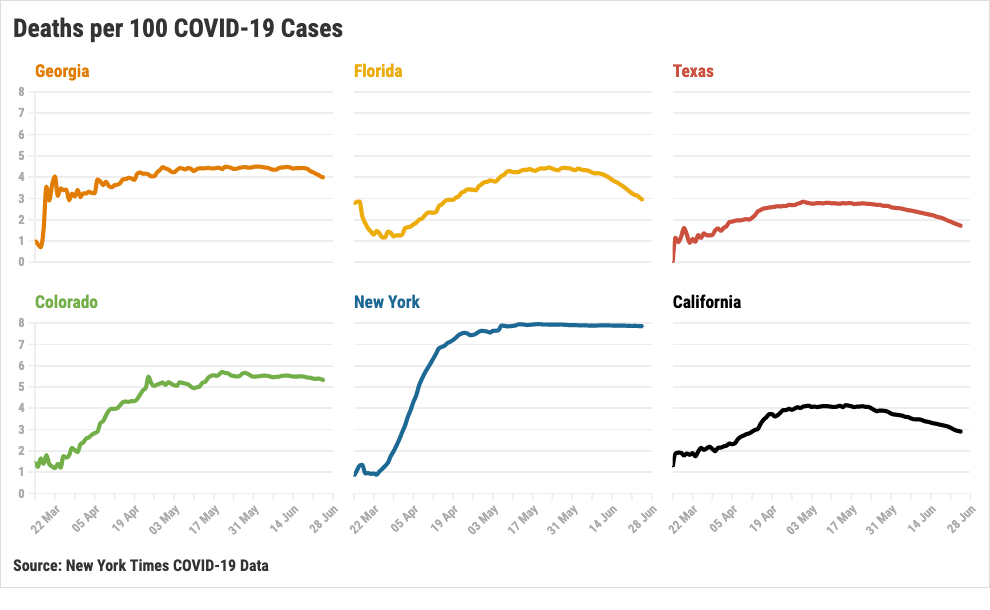 New York’s death rate rose dramatically in April, but stabilized after peaking at 7.9%. In California, the death rate peaked at 4.1% and has fallen to 2.9%.

The overall death rate nationwide as of June 26 is 5.1% — five deaths per 100 confirmed cases — though death rates climb with age.

The falling death rate does not mean fewer people are dying from the coronavirus. If more people contract COVID-19, then there will be more deaths, even though the deaths occur less frequently as a percentage of cases than they once did.

In addition, states with stable  death rates, rather than falling ones, may simply be seeing a slower increase in cases.

One reason for falling death rates may be that more young people are becoming infected as the economy re-opens. States are also doing more to protect the elderly. Last month, New York belatedly reversed a directive that required nursing homes to accept coronavirus patients.

Joel B. Pollak is Senior Editor-at-Large at Breitbart News and the host of Breitbart News Sunday on Sirius XM Patriot on Sunday evenings from 7 p.m. to 10 p.m. ET (4 p.m. to 7 p.m. PT). His new book, RED NOVEMBER, is available for pre-order. He is a winner of the 2018 Robert Novak Journalism Alumni Fellowship. Follow him on Twitter at @joelpollak.