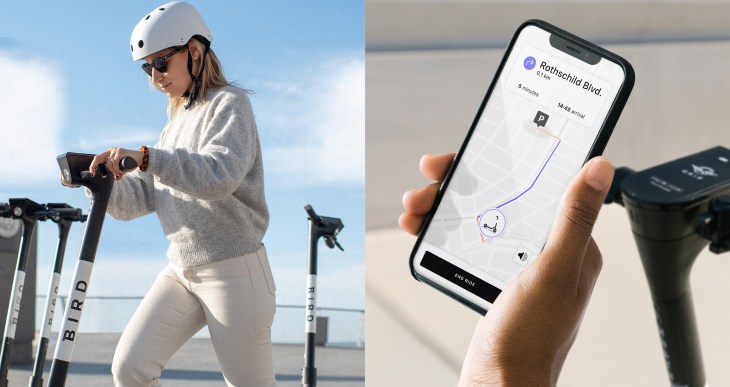 Bird is rolling out a new standalone app, called Bird Maps, in Paris and Tel Aviv that will provide turn-by-turn navigation for riders who want to use bike or micromobility lanes for their entire trip.

The app, which will be available on iOS and Android, was created using navigation software from Trailze, an Israeli startup that has mapped the urban grid with micromobility in mind. Bird has not determined how long it will pilot Bird Maps. The results of the pilot will determine testing in other cities, a spokesperson told TechCrunch.

Bird Maps prioritizes bike lanes, wide roads or paths with less traffic and offers visual and, more importantly, audio directions to riders. A Bird spokesperson said the company expects the audio feature will be the main method people use in the app. Bird is not testing phone mounts, which would be the only safe way for riders to view the navigation.

“With millions of people embracing shared electric micromobility and cities everywhere committing more resources to the development of bike and micromobility lanes, we wanted to ensure that riders could more easily navigate and utilize city infrastructure,” Patrick Studener, head of Bird EMEA said in a statement. “By working with Trailze to pilot Bird Maps in Paris and Tel Aviv – two cities that have recently committed to and developed additional bike lanes – we are making it easier for riders to feel more comfortable and safe as they move about their cities without relying upon cars and hope to pave the way for increased adoption and usage of clean transportation.”

Making it easier and safer to use scooters will help boost ridership, and as a result, generate more revenue. But it also builds goodwill with cities that have grown weary of scooter, bike-share and ride-hailing companies creating new problems and running afoul of local regulations. If Bird can provide a safe alternative to riding on sidewalks, the scooter company could get a warmer welcome from cities.

Bird and Trailze see more opportunity to find safe pathways for scooters and bikes in the wake of the COVID-19 pandemic and the related lockdowns, which prompted more than 300 cities to introduce plans to designate some 2,600 additional miles of slow streets and temporary bike lanes.

Bird said this maps app follows other initiatives it has launched that use technology to improve, safety such as Helmet Safety and Warm up mode.