Ancestral type of COVID-19 virus mainly found in the US: study 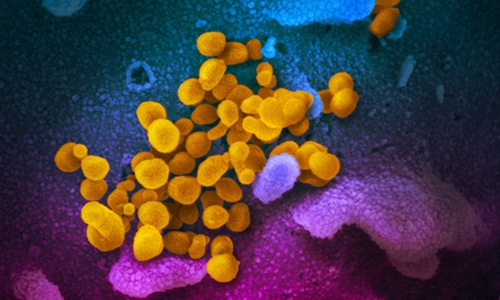 Recent research conducted into the genetic network analysis of the COVID-19 pandemic, done jointly by British and German experts, testified the variant of novel coronavirus that is closest to that discovered in bats was actually found mainly among cases from the US, rather than in Wuhan, Central China’s Hubei Province.

To explain the pandemic origins, experts from the University of Cambridge and their peers from Germany analyzed 160 virus genomes that were extracted from human patients around the world and they found the coronavirus mutated into three distinct strains.

They found that most cases carried type A virus – the ancestral type of virus, which is bat coronavirus, with 96 percent sequence similarity to the human virus – were largely seen in patients from the US and Australia.

Once type A had been detected in Wuhan. The virus infected five individuals from Wuhan and four patients from South China’s Guangdong Province. But most cases from the Chinese mainland and East Asian regions do not carry type A virus but carried the type B virus, which is a variant of type A, the study found.

Instead, patients carrying the ancestral type of virus (type A) were largely seen coming from the US and Australia, such American patients had a residence history in Wuhan, the study found.

As for type C, it is a variant of type B, which is commonly seen in European countries such as France, Italy and Sweden and also evident in Singapore and South Korea as well as China’s Hong Kong and the island of Taiwan , the study found.

In reply to the question why the ancestral type of virus was not commonly seen in China and particularly in Wuhan, but instead the mutated type B virus, geneticist Peter Forster from the University of Cambridge, lead author of the study, told the Global Times that “type A isn’t fitting quite well with most locals’ immune systems in Wuhan” but has “become adapted to American and Australian immune systems.”

The prevalence of variant type B virus in Wuhan may also result from a “founder effect,” Forster said.

The study was published in the journal, Proceedings of the National Academy of Sciences (PNAS).

To trace the pandemic origins, apart from the paper that was published on the PNAS, Forster told the Global Times that they also finished an analysis of 1,001 genomes, which is still unpublished.

Forster said he understands the topic of the viral origin is a “hot potato” after the political dispute between China and the US, but neither the PNAS paper nor the unpublished paper could offer a clear explanation for it.

But their study has evidence that the virus mutation rate is significantly faster outside China and the spread of the disease among humans likely occurred between September 13, 2019 to December 7, 2019.

The best personal loans of 2021

The best mortgage refinance lenders of May 2021