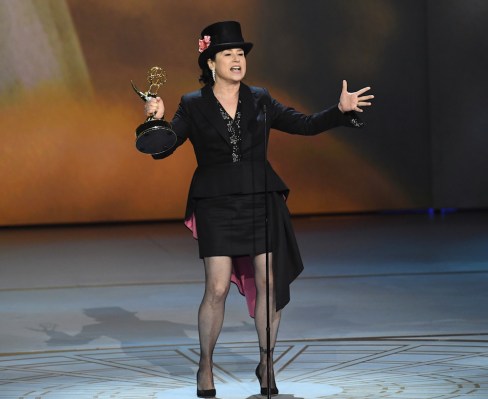 It’s an impressive showing for a freshman show, but long overdue recognition for Sherman-Palladino — who somehow was never nominated for “Gilmore Girls.” As of tonight, she’s the first woman to win the combination of best comedy writing and directing.

It’s also amusing to see Amazon do so well at the awards after CEO Jeff Bezosreportedly decreedthat the streaming service shift its focus from critically acclaimed shows with a niche audience to big budget blockbusters likeits “Lord of the Rings” prequel.

(And yes, it’s embarrassing that I co-hosta podcast that’s all about streaming shows and moviesand yet we’ve never reviewed “Mrs. Maisel” — we will absolutely have to rectify that.)

And while it’s not a streaming show, the wins for “The Assassination of Gianni Versace: American Crime Story” (including outstanding limited series) probably make Netflix feel good, since executive producer Ryan Murphy recentlysigned a $300 million exclusive dealwith the service.

Beyond the individual awards, streaming was a big theme throughout the ceremony, including a monologue that saw co-host Michael Che wondering where the heckNetflix gets so much money to spend on original content, and concluding, “I think we can keep television going for another five, six years tops.”

You cancheck out the full list of winners here.